Arcadian of the Month

Because we miss hanging out with you, we are doing the next best thing: shining a light on Arcadians who contribute so much to the community we are all apart of, and it's almost like we are hanging out together! So we're going to feature someone from Arcadia every month.  A farmer, an educator, a Mobile Market customer, a veteran farmer in training, a volunteer, a donor.  Let's call them the Arcadian of the Month?

This month we're introducing Jennie -- she started as a volunteer in 2017, then completed the Arcadia Veteran Farmer Reserve Training in 2018 and worked alongside Kenny and Katherine as a Farm Fellow in 2019. 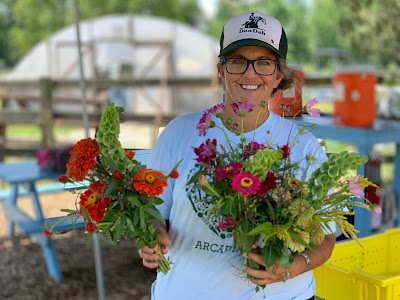 In 2020, Jennie is now farming her own plot as part of the Arcadia Veteran Farm Incubator. Jennie initially planned to grow just flowers and pollinator friendly crops;  she named her tiny farm Change of Plants. After agonizing for weeks over the Johnny's Seeds catalog in January she placed an order for 40 different flowers with plans for a summer bouquet flower subscription program and plenty of nectar for the pollinators.

But, true to its name, Change of Plants is changing. The Coronavirus prompted Jennie to grow food for humans, too. "If ever there's a time to grow food it's now," she said. What started out as  1/4 acre of flowers is now 1/8 an acre of vegetables she describes as "a salad bowl" destined for CSA subscribers. The remaining 1/8 of an acre will become a "pollinator experience" with cutting gardens, a walking path, a loofah house and a bench set in a thicket of sunflowers.

Jennie's journey to farming is about as straight as the winding path she she carved out with a tractor on her small farm last weekend. The child of heroin addicts, she grew up in foster care in Southern California. She signed Marine Corps enlistment papers at 16 to get herself out of trouble. After four tumultuous years stationed at a base in California, she left the Corps to get married and start college in New Mexico. September 11th interrupted her last semester; she found a recruiter to bring her back on active duty a few days after the Towers fell. She spent much of the next decade telling the Marine Corps story as a public affairs officer while her husband and friends went off to war. 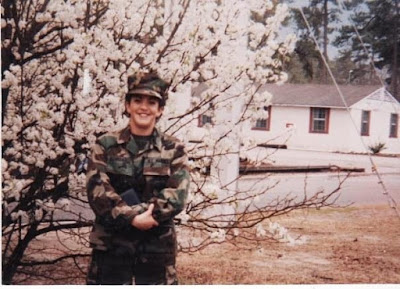 After dozens of funerals and a divorce, she hung up her uniform for good in 2006 but continued as a civilian public affairs officer for the Department of the Navy. She then headed to Afghanistan to work on a communications project for the U.S. Army.

Home from Afghanistan and recovering from injuries sustained overseas, she met and fell in love with an active duty Marine. They dreamed of rural life and starting a farm --a life far away from the war, the military, and the city.  Love emboldened the self-described city girl, and they started looking at property.

The future changed abruptly when her fiance, battling with post traumatic stress, took his own life.

Jennie describes herself as "adrift, angry and trying to figure out what the next chapter held." A scooter accident left her with a traumatic brain injury; it wasn't her first head injury but it was the most significant. Still recovering, she accepted a job offer at the United Nations headquarters and moved cross-country to New York. The pace and cacophony of the city revealed the extent of her brain injury. Combined with the the grief and anger she'd shoved aside after her fiance's suicide, old traumas she hadn't dealt with from her time in uniform, and the overwhelming rush of life in NYC, she says she felt like she was drowning.

Reprieve came -- and the inkling of a new life dawned -- in the form of weekend visits to a farm in New Jersey. She left New York two years after arriving to "chase down that last semester of school" and find out what life away from the city held. That decision lead her to Arcadia -- and this time the farm dream was her own.

Spending time on the farm has been the perfect therapy -- and, she says, likely saved her life.

"Arcadia is the community I didn't know I was looking for. It's a place to learn and grow--a place where my deficits aren't glaring because they don't know me any other way. They answer my questions, even when I ask them again the next day, and the next," she laughed. "I'm excited to put some of my knowledge to the test on my quarter acre and can't wait to see what the season yields." 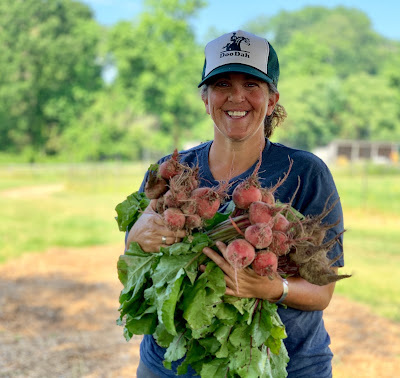