From the start of market season, we've been asked, "Do you have tomatoes?"  As a gardener and Vegetable Snob (only the best will do!), I've been waiting, too.

Well, dear friends, tomatoes (or as I affectionately call them, the "Jewels of Summer"), are finally in!  Purple Cherokees, Yellow Brandywines, Amish Paste reds, and Green Zebras were the stars of last week's market.

To highlight their long-anticipated arrival, I've been preparing some Tomato Jam as our featured Mobile Market recipe, using several kinds of Arcadia's heirloom tomatoes.  I think Tomato Jam does an excellent job of highlighting the outstanding taste of these beauties, and have been told by a number of market participants that I should sell the jam itself!

That being said, what's more delectable than a perfectly ripe, freshly-picked tomato?  Not too many things come to mind.  So, come on down to market and pick up some home-grown, heirloom tomatoes today! 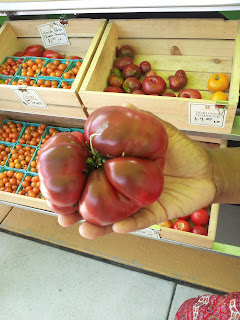 1. Heat a medium saucepan over medium heat.
2. Add olive oil, garlic, ginger, and red onion, sauting until translucent.
3. Add tomatoes, breaking them up with a wooden spoon.
4. Add vinegar, honey, brown sugar, ginger, cloves, cinnamon, and star anise.
5. Simmer, stirring occasionally, until tomatoes have dissolved and liquid has evaporated (about 60 to 75 minutes).
6. Discard cinnamon sticks and star anise before serving.
Posted by JuJu at 5:42 AM