A Marine, A Market, and a Reflection on the Power of Food

My name is Nick Wood, and I have been working as one of Arcadia’s two Veteran Farm Fellows for six months now. One of the things I have so far found the most satisfying about my work at the farm is getting to see the literal fruits (and vegetables) of my labors.  I put seeds into soil, and real food is the result! Since I have had a hand in growing all the food that we prepared for delivery to the Mobile Market, getting to work on the market for a week gave me a similar, but magnified, sense of satisfaction. Not only did food come about as a direct result of my work, but people bought it, ate it, expected it, relied upon it, and loved it. 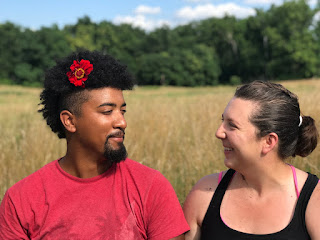 During my week with the Market, I mostly just pitched our food to our customers.  While many of our clients knew exactly what they wanted (and told us so in no uncertain terms), some of them were new to some of the vegetables and greens we had on offer.  Those curious customers were happy to talk recipes and preparation tips, and I received more than a few excellent ideas and recipes in return. The common thread of those many conversations was the passion everyone had for good fruits and vegetables. 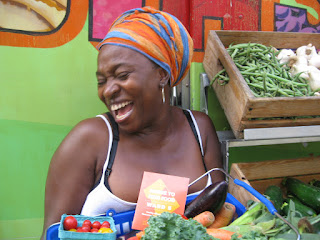 I was reminded of one of the misconceptions that Arcadia was founded to fight against- the idea that there aren’t any good grocery stores in these food deserts because they ‘don’t want healthy food.’  Many of the people I spoke to had been to the farmer’s markets in the better served sections of DC, like Dupont Circle- which meant that they were willing to take what must have been a long bus and metro ride to get to the good stuff.  I got to see firsthand that “missing” desire for good, sustainable food, and I assure anyone who cares to ask- the demand is there. Bring them the food at a price that they can afford, bring to them the dignity of good choices, and the people will come.

The desire for good food and the way we bond over preparing and sharing it is a universal element of the human condition.  Helping someone eat well is the first step to helping to lift them up. And exchanging recipes and talking about food is a great way to get to know who someone really is.  I was raised in the Upper Midwest, and most of my family is from the Deep South. And yet since coming to the District, the most at home I have felt has been sitting with a bunch of vibrant, cantankerous, enthusiastic elderly black folk in the shade of our market tent after the rush waned, talking about how best to prepare a rack of ribs.

Getting to know the people Arcadia serves puts me in mind of a quote by the late, great Anthony Bourdain:  “People are generally proud of their food. A willingness to eat and drink with people without fear and prejudice... they open up to you in ways that somebody visiting who is driven by a story may not get.”  I can’t help but wonder if maybe as a people Americans would be a little better to each other if we broke bread with our neighbors a little more often.
Posted by Arcadia Veteran Farmer Program at 7:44 AM 23 comments: