Let them eat cake (in the shape of a school bus)!

Last night, during my weekly volunteer shift at Brainfood, we learned about cake decorating. Since there were enough cakes for volunteers, too, I had a chance to design one of my very own. And what did mine look like? Well, a school bus, of course! It's true, I'm obsessed. And I'll be bringing it with me to tomorrow evening's happy hour at Lounge 201. 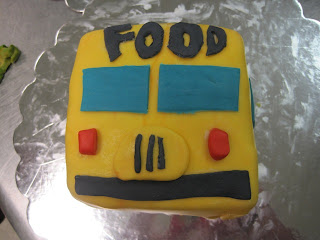 Come and laugh at my pitiful first attempt at working with fondant and enjoy a slice of the tasty-but-not-overly-large school bus cake. If you arrive on the later side, there will still be tasty, free appetizers featuring beef from White House Meats and a cash bar with seasonal cocktails, but I can't promise there will be any cake left....

So get there early (and bring a credit card to make a secure online donation).

a PSA from Arcadia fans at Georgetown

Excitement about what Arcadia is up to seems to be spreading!

A number of folks came up to me to ask for more information on the mobile market after I gave a little talk following a screening of The Economics of Happiness (part of the DC Environmental Film Festival) on Saturday evening. The little stash of school bus pins on the information table probably didn't hurt.

I went to the doctor yesterday -- I seem to have sprained my back (what am I, 83 years old??) -- and after he handed me a prescription for muscle relaxers the head of Internal Medicine walked out of the exam room with a school bus pin in his lapel and an assignment to get in touch with the local health outreach coordinator to see if we just might figure out some kind of partnership at a healthy eating event.

Then, just today, I heard back from a student at Georgetown University with the final product of her group's class project... check out their PSA that promotes healthier food options in DC Wards 7 and 8 through the mobile market.

Love it! Come on, folks, we've just about $7500 left to raise by April 22! Tell your friends! Tell your neighbors! Tell your PTA! Tell your church congregation! This is a community effort, with food for the people and by the people, and we need your help to get this bus on the road!
Posted by :)Ibti at 4:30 PM 1 comment:

An Irresistible Fleet of Young Agrarians to Cycle Through DC

“The Greenhorns” Documentary Film Premieres in the Nation’s Capital

ABOUT THE GREENHORNS: The Greenhorns is a farm-based, grassroots national nonprofit group founded in 2007, with the mission to recruit, promote and support America’s young farmers. Visit www.thegreenhorns.net for more information.

Email ThisBlogThis!Share to TwitterShare to FacebookShare to Pinterest
Labels: events

I just checked our Kickstarter page and thanks to Arcadia supporters, we've raised nearly half of the $15K goal so far. Woo hoo! Thanks to all who have contributed, whether through a direct financial contribution or by helping us spread the word about this exciting project -- keep up the great work!

For those who may have missed the kickoff event at Churchkey earlier this month, please come join the Arcadia team at Lounge 201....

Come and learn about Arcadia’s Mobile Market, bring your friends, and don’t forget a credit card to make a secure online donation to our Kickstarter campaign on one of the on-site laptops. Lounge 201 has generously agreed to donate a percentage of sales to support the mobile market.

We need the community to pledge $15,000 on Kickstarter by April 22.
If this doesn't happen, we get none of the money raised on Kickstarter and it gets a lot harder for us to bring healthy, local food to folks who need it. (And nobody wants that to happen.)

Here's a link to the facebook event posting (if you're into that kind of thing).

I just checked the stats and so far we've raised 37% of our $15,000 goal to get my mobile market on the road! I'm still shopping around for a bus, but I spent much of yesterday helping a great group of folks remodel and convert an old school bus to run on veggie oil. Oooh, I'm getting excited to have my own mobile market to work on soon! 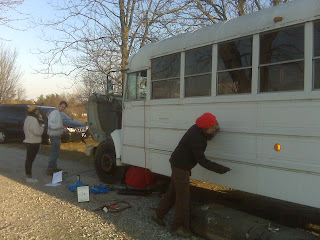 Now, I am not at all trying to divert attention or funding from my own project, but you really should check out what the cool folks behind Pick Up America are doing. Their veg-powered bus should be hitting the road any day now as they head out on a cross-country, roadside trash pickup odyssey....

Getting back to Arcadia and all things sustainable food, I hope to see you all at our celebration barbecue at the farm this May. Remember: we can only throw a party if we meet our goal.... We still have over $9,000 left to raise by April 22, so if you haven't donated yet, please check out our online campaign!

Donate now to get our food bus on the road!

While Farmer Mo's been nurturing baby seedlings in greenhouses around town and getting our property at Woodlawn ready for spring planting, I've been running around the city with a flipcam these past few weeks.... With the help of a dedicated group of cinematic wonderwomen, we've managed to pull together one of the most fun 2-minute videos ever. Behold, our Kickstarter campaign video:
Spread the word, eh? I think we can definitely raise well over the $15,000 goal we've set. The sky's the limit, I say!

(Though if this thing goes viral on YouTube I'm going to kick myself for not wearing any make-up that day. I mean, seriously, couldn't SOMEONE have suggested I put on a little lipstick? And my hair. Oh man. My mother is probably shaking her head right now. Actually, Eminem is probably shaking his head, too.)
C'mon, can you think of a better cause than a school bus that brings healthy food around the District? Click here to donate.
If you're in the city tomorrow, come meet the Arcadia team in person during our happy hour event at Churchkey: a donation of $25 or more earns you a complimentary beer. Not that you're in it for the beer. No, you're in it for the free t-shirt. Um, I mean because it's a good cause.
Posted by :)Ibti at 3:41 PM 2 comments:

Hope you all are enjoying this beautiful week -- spring is near! Farmer Mo started digging this week at Woodlawn and could really use your help on Monday, March 7 to get out the last of the grass!

Come get dirty and do some good. We're seeking 10-15 volunteers from 10am-1pm on the farm at Woodlawn.It will be muddy so please wear boots and some clothes you don't mind getting dirty.